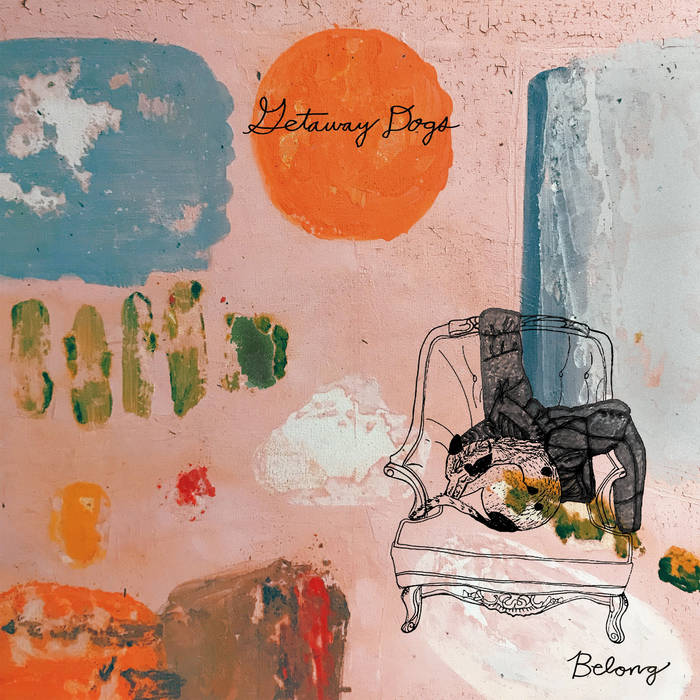 Getaway Dogs' sound is perhaps conveyed best in the self-coined genre "Cushy Bedroom Psychedelic Bossanova & Dreamsurf." A potent blend of psychedelic indie rock, Tropicália, and soul, Getaway Dogs is the brainchild of Brazilian-American songwriter Kai Killion. There exists a symbiosis between these different elements, a dreamscape rooted at its rawest form in Killion's songwriting. Since the release of their first album "Lost in the Ebb" in 2016, the band has made a name for itself in Santa Cruz and greater Bay Area, having shared the stage with notable acts such as The Mattson 2, Durand Jones & The Indications, & Gabriella Cohen. This Fall the band is proud to release their second and most refined album, BELONG.

This is the soundtrack to a lush summer dream: A rosey, jazzy, and fruitful escape through music. Hypnotic vocal harmonies and swirling guitars, entrancing drum beats and slippery keyboards: All these and more play into Getaway Dogs’ latest fantasia, BELONG. Unifying elements of psychedelic surf-rock, indie, folk, soul and Tropicália, Getaway Dogs dive deeper into the hidden caves of musical discovery, embracing the vastness without going adrift. Each song conveys its own particular feeling as honest, nostalgic lyrics inhabit the atmosphere. The album title calls the listener in to feel at home in the dreamscape, and to hold space for those who feel overwhelmed by the current state of the world. BELONG is available on all streaming platforms now.

Track Name: Only in Retrospect
yes
only in retrospect
can i know if it was worth it
will i regret?
so by that logic
i'll take my chances
we have our moments
yes

all will distill and dilute
into its eternal essence
i'll be waiting
so for that reason
i'll take my chances
only in retrospect
Track Name: 2425
twenty four and soon twenty five
where's this man that i should become?
is he dead or is he alive?
are his bones my own?

twenty five and soon twenty six
where’s this man that I should become?
is he broken or is he fixed?
are his bones my own?

my shadow one day won’t be mine anymore
and that is fine and that’s how it goes
time is short and breaks like a nose
Track Name: Sawtooth (I've Been Wrong Before)
Is true love climbing a tree for a good view?
Don’t leave this visceral place it’s inside you
Fractals in dark shiny tunnels and k-holes at 3 am
All my logic was out in the wilderness
It never happens like this

I’ve been wrong before
And I’ll be wrong again

I’ve been wrong before
And I’ll be wrong again

Beauty of things
Must be they change

heart of mine barely keeping time
far away visions of today
love's alive love is here again
and all we need is all we have within
Track Name: Daze Gaze
and i found myself in a daze gaze
sending old thoughts through wind and sun rays
on the wild edge corroded by slow time
someone told me don't hurry

and i found my self in a daze gaze
took a slow dive to find my sea bed
it was soft
Track Name: Lagunas
take me to the outskirts
the margins of the moments
i've been disconnected
calm but not collected
down and underground
take me in your arms
so i can belong

into what's left of the night
Track Name: Keep
when you were a grey owl in some past life
you had a place you'd go
you were a lotus once out in some lonesome pond
you were a deep violet heart beating hard in someone's chest
and you were the dotted line, spectral and undefined

breathe in and out again
shortwalk fourblocks suspended

now you're a dreamer, a healer, a divine witch of light
making your moonwater from mountain springs at night
and putting me under some good lovespell
i'd say it went well
so take me apart and keep me in those mason jars

Bandcamp Daily  your guide to the world of Bandcamp

Guests include Kassa Overall and Muriel Grossman, plus an LP of the week by Van Hunt.